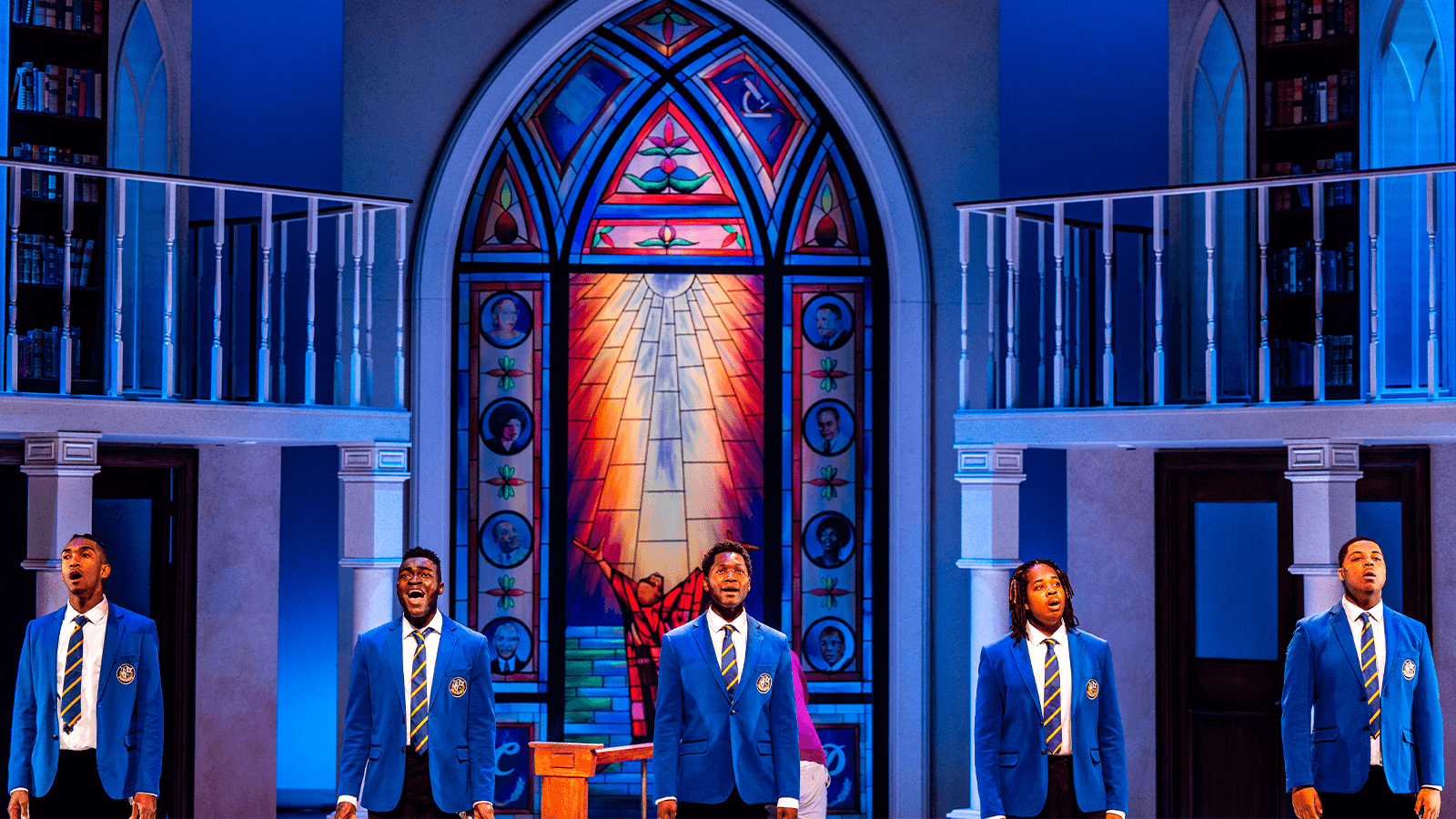 In Conversation with Mike Payette, Director of Choir Boy

Choir Boy is in the house, and we're excited to have Mike Payette bring his vision and leadership to this breathtaking production. In this edition of CS Grid, we hear about his love and passion for reviving this play for the stage, introduce the wonderful characters, hear what Mike loves about the show, as well as what he wishes audiences will take away from this production!

What is Choir Boy about?

The play is about a young man who is a student at the Charles R. Drew School for Boys, which focuses on uplifting and empowering Black excellence. It's a play that takes place in the States, in Chicago, to be exact, during the Obama era. And so, this young man, Pharus Young, he is one of the students and he's the choir lead for the school.

And as a young Black queer man, he's also navigating his way through the complexities of the ecology of the school where bullying certainly takes place, but also the positionality of what it means to be a young Black man during this time. And so this is partly his journey in embracing all of the richness that he brings in but with the challenges that come along with that as this is also a play about brotherhood and and the scope of Black communities and the various realities and ecologies that make each of these communities unique, and how they work within this sort of system of the Charles R. Drew.

Can you introduce us to the characters?

Yeah, so it is a cast of seven. As I mentioned, there are five choir boys, there's Pharus Young, who I mentioned, and then there's also Bobby, who is what we would call, you know, Pharus' main, sort of, antagonist. Now, he comes from a slightly privileged background, he happens to be the nephew of the headmaster, Headmaster Marrow, who's also young into his role at the Charles R. Drew. Bobby is one of the students of legacy. His bestie is Junior, who is trying to navigate his own voice whether or not he's going to associate with one sort of group of people, or another group of people to, sort of, cement his own voice as he's growing up. Then we also have AJ, who's the, sort of athlete of the group, and AJ is also Pharus', dorm mate, and for all intents and purposes, a conduit and ally, sort of a sounding board to Pharus throughout his journey. And then, of course, we have David who is an aspiring pastor, who is going through his own sort of journey, not unlike the other four, that gets revealed over the journey of the play.

And so within these five people, really these differences of experience is what makes the collective of the choir, or the chorale, so to speak, really dynamic and dramatic, and deeply personal and relatable. Yeah, so there's also Headmaster Marrow, who I mentioned, and then there's Mr. Pendleton, who is a retired teacher, he's probably one of the founders of the school, back in the 60s when it was founded. And he, you know, Mr. Pendleton was part of the movement of civil rights, he was very much at the forefront, marching along with his Black brothers and sisters. Although he himself is white, and he's the only white character in the play, he is attuned to what is happening around him and he's also trying to navigate his position within the environment of Blackness that the Charles R. Drew represents.

What do you love about the show?

Goodness, this place is so rich in so many levels. So, I believe it was written in 2013, published around 2014/2015, there are multiple versions of this play. But what has been consistent is Tarell Alvin McCraney's ability to speak from his own personal experience in being, you know, a Black gay man himself, and those relationships with society, but also the connection of where faith and religion and spirituality lie within Blackness. And so, I find that to be a really profound and compelling conversation.

You know, what are our relationships to music? What are ourrelationships to spirituality as it relates to say, our ancestors or generations before us, the traumas that were associated with some of that music? Where does that stand now? So, the sort of musical, dramaturgical question is really, really rich. But outside of that, it's also it's a coming-of-age story, and I think we can all identify with many of the paths that these young people go through on a personal level, or, you know, in terms of somebody that we know, and this isn't an issue play by any means. It's a story about the complexities of the human condition.

And how it relates to the coming-of-age is the is the discovery of how we can actually find hope and strength within within our various you know, circumstances and realities. So that combined just allows for like a really theatrical, heightened, stylized production opportunity that is a really an artist's dream to sort of dig into and find the logic within a really sensorial experience that invites so many walks of life. And so my hope in terms of the audience experience with that is that that can be shared to them as well to actually be moved by the music and see, or rather, hear, experience that connectivity to again, those human complexities. That's why I love it, among many, many other reasons. 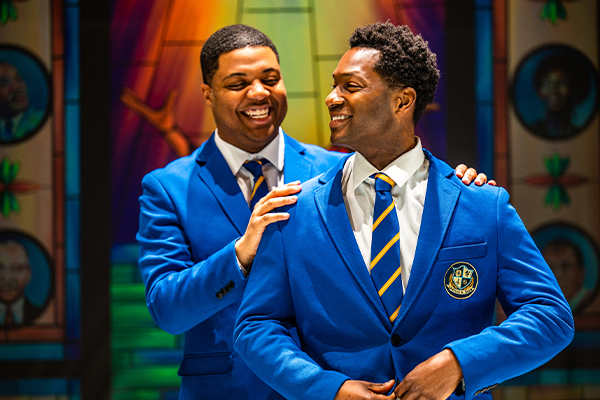 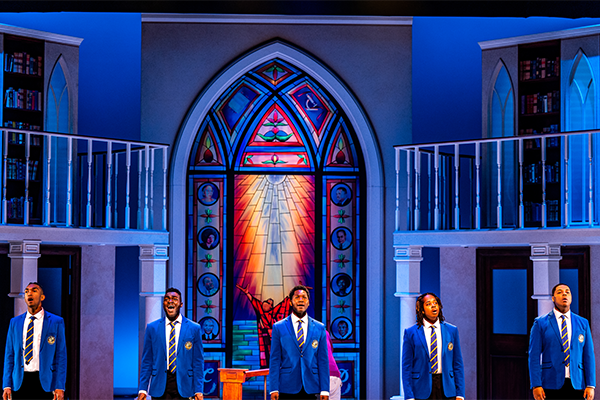 Can you describe your vision for the show?

What the play asks us as artists is, it's a challenge, and it really is a technical and artistic feat because all of the music is sung a capella, there is no cheating, there's no like notes given by any monitors or anything like that. It's all through the technical skill of the actors supporting each other, the ensemble nature of this piece. Although we do follow Pharus' journey, we also follow the other six members, equally and in different ways.

I think, you know, when it comes to vision, is really to embrace that and to see stylistically, or in terms of design, where we can blend or embrace the poetry that Tarell Alvin McCraney's writing evokes, as well as, say, the more common or colloquial language as uniquely from our Black communities. And so that juxtaposition is really fascinating because it gives us this balance of deeply rooted fundamental, recognizable relationships, but within a really, really large, almost ancestral, celestial scope. And so for me, it's to make sure that all of those elements are together and to empower that ensemble recognition that it's linked to the audience experience.

Does the Moonlight script have much in common with Choir Boy?

I'll say that it was after watching Moonlight that I was like, oh, and then recognizing that Moonlight started as a play that Tarell wrote in the early stages of his own career, that I was like, oh, so you know, that's super dope that this Oscar winner is also a playwright. And so, I went a little bit more into his repertoire and that's where I came across Choir Boy. In terms of like a relationship to Moonlight, no, they're different stories. But I think what Tarell does really well is he catches the young heart really, really well, and how much those formative times in a young Black man's life really steer the way for what the future can hold or what it can provide.

And Choir Boy is akin to that sort of continued investigation of again, what experiences we have as youth and the fundamental relationships that we need in order for us to succeed, to thrive, and literally to live. He talks about life and death in all of his stories, and Choir Boy is no different.

What do you think audiences are going to feel when they come see this show?

For a theatrical offering alone, this is a really hype play. This is a really beautiful production and there's so much work that's gone into the creation of this production to be brought here to Toronto for the first time, and then later to Vancouver.

Audiences will experience a really full, a really heartfelt, really charged and raw visceral and beautiful story play told through the immense possibility of what the music or the sonic, soaring spirituals again the R&B that transcends us all. So, I imagine audiences will leave us with that feeling of heart open and mind widened, and hopefully feeling that much more rich by the experience of these stories that are being played in front of them.

More From the Grid 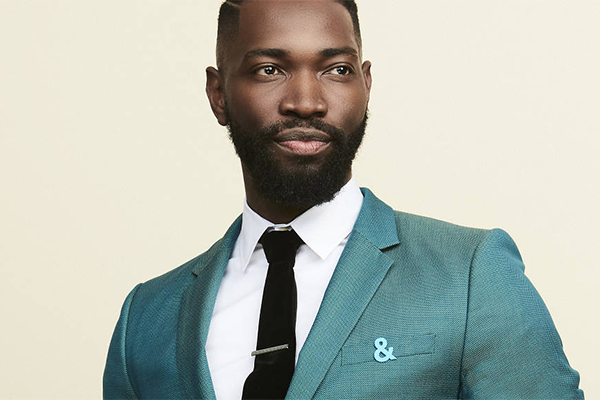 In this edition of CS Grid, we look at the remarkable career of Academy Award-winning playwright Tarell Alvin McCraney. Known for co-writing the film, Moonlight, guest writer Glodeane Brown takes us back to his creative milestones that eventually weaved into Choir Boy, that will be live on stage at the Bluma Appel Theatre this fall. 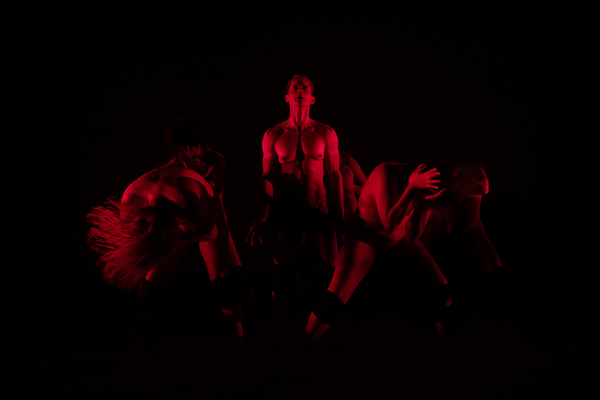 Backstage with the Performers of Human Measure

In this edition of CS Grid, we take you behind the stage to hear from dancers, Jas Lin and B Gosse. We learn what makes this production unique to them, working with Cassils and the team and what they hope audiences will take away from this performance. 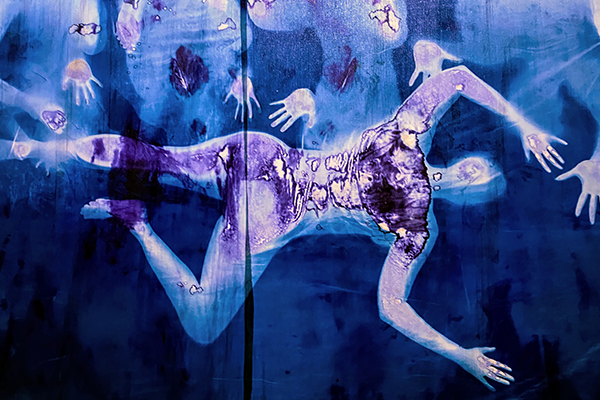 In this edition of CS Grid, we take you backstage to hear from composer Kadet Kuhne. In this exclusive interview, we learn about Kadet's creative journey exploring the material, what makes this production unique, and what Kadet hopes audiences will take away from this performance.